On April 10, 6:30 PM at the Carrollton (OH) Bible Chapel: I will be participating again in the Good Friday Welsh Story Telling event. I have written a short narrative story based on the meeting of Abraham and Melchizadek. All are welcome to attend.

On April 14, 4:00 – 7:00 PM at the Morgan County Library in Martinsville, IN: as mentioned before I will conduct a book signing for The Pilate Plot. I will have books on hand at $15.00 @ or you can bring your previously purchased book.

On May 11, 7:00 PM at First Christian Church of Malvern (OH): I will be meeting for a discussion of The Pilate Plot with the congregation’s book club. They have kindly opened the event to anyone who would like to come. Hope to see you there.

I will soon be finished with the first draft on another book. I started working on it two years ago while I was seeking publication for The Pilate Plot. It is not the sequel. Many friends and family members were very helpful in the process of writing The Pilate Plot. They read the first draft and asked questions, made suggestions, etc. I cannot thank them enough. If anyone out there is interested in joining the critique group for this second novel, you can e mail me at booksbyterrybailey@yahoo.com. I’d love to talk to you about it.

Finally, a non-announcement. Many of the people who talk to me about The Pilate Plot ask the same questions. “What happened to Nathaniel Stone? Did he die or not? How was he saved? Did Stone and Stearnes go back in time or did Stone somehow prevent that?” Obviously I made a few things less clear than I thought! So, Nathaniel Stone destroyed his computer model because he foresaw two events – one of which he knew President Cooper would be interested in – pp. 86-7. The first of these events saved Nathaniel from death. He arranged for his execution to coincide in time and space with the wave distortion and was subsequently spared from drowning – barely. This event moved very little in time, taking Stone back only a few days but moved a larger distance in space. For those who didn’t find the physics to be their favorite part – don’t worry. The short version is that the event moved Stone to shallow water at a point a few days before his execution. Nathaniel received additional aid from a fisherman who happened to be on the scene – pp. 195-7. In the epilogue Stone knows, because it was the second event the computer predicted, where the President will make his next attempt to send someone back to deal with Jesus. He simply hides out (snorkels) and grasps the anchor line of the boat Stearnes is in, to tag along. They both go back in time. I hope that clears it up. For those who might care – in the first draft, Nathaniel Stone drowned. That outcome was so unpopular with my critique group that I saved him in the re-write! If you have an opinion on any of that – I’d be glad to hear from you.
Posted by Terry Bailey at 10:22 AM No comments:

Hey again, I’ll share one more observation my friend George made. Remember, you can read George’s entire review on his blog www.decrepitoldfool.com He felt that David Urbane was a clumsy caricature of an atheist. George seems to have two thoughts on the matter. 1. He sees Urbane as an example of ‘atheism due to pathology’ rather than just a person who does not find the ‘Christian myth’ intellectually credible. 2. George says that you’re not an atheist if you’re mad at God as opposed to not believing in him. In terms of The Pilate Plot, it seems best to me to answer these in reverse order. As the book set out, Urbane was not mad at God – in whom he genuinely did not believe. His grudge was against the historical legacy of Jesus Christ. It does not require belief in God to arrive at the (I feel obviously mistaken) conclusion that the legacy of Jesus Christ is shaping history and society in ways you would rather it did not. Further, said legacy invaded not only Urbane’s comfortable materialistic/humanistic worldview, but his home. When his wife sold out to Jesus, it ticked him off! He did not have to believe in God to experience this anger. Which, leads to the pathology issue. My friends, we are all messed up. Oddly, George agrees with me on this point but is still offended by the pathology (messed upness) angle. Urbane’s personal pathology had to do with the fact that on one level he loathed his own actions in abandoning his wife. This was compounded by the fact that she got sick and died soon afterwards resulting in the complete loss of any opportunity for dealing with the personal guilt. I maintain that this is an entirely accurate human pathology whether or not one is a believer – Urbane was not. That his pathological condition played a part in leading him to become a believer is such a profoundly Biblical concept and such a commonly seen scenario today that it hardly seems like any kind of caricature to me. But George’s perspective is valuable to me and his critique has already helped me in some ways as I work on the next project. I’d be glad for your input.
Posted by Terry Bailey at 9:57 AM 1 comment:

First, let me share with any interested parties that Iwill be making a presentation about The Pilate Plot at the Malvern (OH) Rotary, March 30, 6:30 PM. Then let me share a little more about my atheist friend's critique of the book. By the way - George's full review is up on his blog www.decrepitoldfool.com I issue the same warnings as before - Christians will not find George's blog particularly enjoyable. In addition to not caring for Nathaniel Stone's dialect, George felt that the 'razor sharp' focus on the torture of Brian Stearnes amounted to 'violence porn' (that term appeared in notes George sent to me rather than in his official review.) George said he read the torture segments since he didn't want to miss any key ideas and subsequently wished he hadn't read them. In other words - George feels that the torture segments are harmful to the reader and should be deleted. I am quick to admit that The Pilate Plot includes darkness. It's in the book because I believe in the existence of evil as a personal force in fallen humanity. I believe in both heaven and hell breaking out on earth here and now. George would insist that the message could have been carried without the details of the torture. Maybe he's right. What do you think?
Posted by Terry Bailey at 11:13 AM 4 comments:

Comments from an atheist

Hey there. It took a while but I got an old college friend who, unfortunately, has since become an activist atheist, to read and comment on The Pilate Plot. I wanted his point of view and it has proved valuable to me. He will soon write a formal review on his blog (www.decrepitoldfool.com) . If you visit the blog - just be prepared to hear many unkind things said about your own faith and points of view. I may post parts of that review here when it appears. In the meantime I wanted to pass on some of the comments my friend shared with me and perhaps hear from you concerning them. Naturally, the more I can learn, the better job I can do with any future writing. I'll start with something small. So, here's one of my atheist friend's observations. 'Nathaniel Stone's dialect is as annoying as Jar Jar Binks and as irrelevant to the character.' Let me know what you think. Thanks.
Posted by Terry Bailey at 7:56 AM 2 comments:

For all those interested, Tesa Strasser gave The Pilate Plot a really nice review in the East Canton Press News, January 29, 2009. Thanks for the kind words Tesa! For those who take The Press News, check it out. For others, I'll post at least parts of what Tesa wrote on the website under reviews. I will also be speaking about the book and the writing process at the East Canton Rotary meeting Tuesday, February 3, at the Foltz Community Center of East Canton. The meeting starts at 7:30 AM. I will speak at 8:00. If any local friends want to get up that early and make the 7:30 time, I'll spring for breakfast! Rotary always serves a good breakfast.
Posted by Terry Bailey at 8:31 PM No comments:

The booksigning at the Morgan County library (110 S. Jefferson - Martinsville, IN) will take place on April 14, 4:00 -7:00 P.M. Books will be available for $15.00 or bring your previously purchased book for autograph. I'll look forward to seeing you there.
Posted by Terry Bailey at 9:17 PM No comments:

Thanks to anonymous for your comments. Yes, President Cooper's plans will be ongoing in the sequel. His plans are all geared of course toward world dominion, however, he used parts of the program to train Stearns for his mission to the past - also ongoing in the sequel. As to the torture, Yes, I also believe that all expressions of evil are foretastes of hell. The more blatant and horrific the evil, the nearer hell it is. Satan moves those who will cooperate to release hell here and now as much as possible (his kingdom come on earth as it is in - well, you get the idea!). Cooper is pretty cooperative.
Posted by Terry Bailey at 9:11 PM No comments: 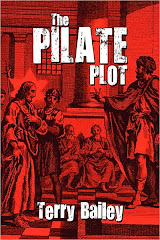 Terry Bailey
I was born in 1957 in Morgan County, IN. I experienced the call to ministry at age twelve and have never considered doing anything else. I graduated from the Eminence High School of Eminence, IN in 1975, earned a Bachelor’s Degree from Milligan College in 1979 and a Masters of Divinity from the Emmanuel School of Religion in 1985. I married in 1979 and my wife (Mikel) and I have raised three children along the way. Beginning with a part time youth ministry while at Milligan College, I have ministered with the Mountain View Church of Christ in Johnson City, TN, Harmon Chapel Christian Church in Shady Valley, TN, Drexel Gardens Christian Church in Indianapolis, IN and from 1995 to the present, Indian Run Christian Church in East Canton, OH. I love the Lord Jesus Christ and would be overjoyed to talk to you about Him.